I’M RUNNING OUT OF PATIENTS

Hospitals would be shit without patients and not just because doctors and nurses would be left shuffling along the corridors, bumping into things, bumming (does that still mean what it used to mean?) endless cigarettes off each other and wondering what on earth they could strike about now…’We’re working too many hours!’ Well piss off home, I keep telling you there’s nobody else here. 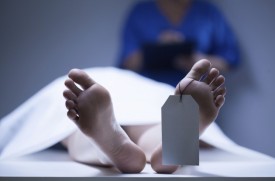 ‘I’m sorry to say, it’s a little worse than we first thought’

On a high dependency ward, other patients offer so much entertainment to distract you from the unspeakable horrors of hospital, like the person in the bed next to you dying in the night and the next morning the person sitting in the chair visiting the corpse – still undiagnosed as dead – also dying. Irish Keith, still tragically alive and well, was in the bed opposite and offered a wide-range of inappropriate comments to anyone close enough to hear them through his never ending rasping death rattle. ‘Ooh, she was dying to get out of here’ and ‘I told you the food was bad’, followed by ‘She bloody deserved it!’ and ‘Makes you think doesn’t it’, the last of which was by far the most offensive.

Irish Keith (there was another Keith but he was just ‘Keith’) was desperately unwell and his prognosis was poor; the doctors had implied he would be ‘leaving’ any day now. But sadly, that day kept not coming. One ward round, I’m pretty sure I heard the exasperated consultant quietly ask the nurse ‘when’s he going to die?’ but let’s give him the benefit of the doubt and assume that he actually asked ‘when’s he growing two pies?’, a common question in hospital after all.

In my more-accepting, less-disgusted-by-everybody-else moments (occasionally  experienced after 30 mg of Temazepam, when I momentarily forget where and who I am) I felt sorry for Irish Keith. Thanks to his offensive opinions, nobody ever came to see him and nobody stopped to chat as they shuffled quickly past, heading towards the thoroughly appalling Day Room, tugging their wheeled posts of dangling, bulging bags of piss behind them; lots of urine at least meant their kidney was making the stuff, it’s the patients slumped in the corner, with split, brittle bags now home to a family of lovable Dormice that you need to worry about, although those patients are long dead so you may as well find something else to worry about. Worry about the Dormice for Christ’s sake, that’s no kind of place to raise children.

For the week I was on that ward, Irish Keith remained jolly in his obnoxious trying to engage with people way; calling out, waving, beckoning, gesticulating, he seemed oblivious to the fact that nobody wanted anything to do with him and he happily carried on insulting everybody. My turn came following a worryingly elevated potassium result and an erratic heart-rate, which resulted in my bed and me being wheeled rapidly away in case I needed a spin on the defibrillator – I didn’t mind, there wasn’t much on TV.  Upon my return, Irish Keith piped up.
‘You’re still alive then? Shame. I wanted your bed by the window. Bastard’.
‘Ah, thanks Keith, that’s makes all the difference’
‘Fuck off, you’ll die before me, even if I have to put a pillow over your face in the night. You bastard”.

It was an idle threat, he was too sick to get out of bed unaided and I was pretty sure that even the grumpy nurse wouldn’t have helped him asphyxiate me in my sleep but I did wonder whether with his last dying breath he’d give it a go.

As it happens, he did nothing as energetic as getting out of bed with his final inhalation. Two days later, with a rattling coughing fit that sounded a lot like ‘you wanker’, he was dead.