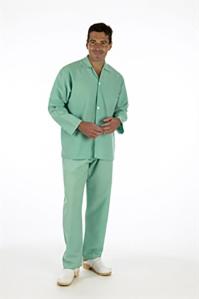 For reasons unknown, I have never been asked why this lighthearted, damning expose of the NHS is called Disposable Pyjamas. Never, not once. So, for those of you who couldn’t care less and have never shown any interest whatsoever, here’s the explanation you’ve all been eagerly waiting for. After all, it’s only fair that you, the disinterested masses, finally get to put your nonexistent curiosity to rest.

Unlike some independent hospitals, the NHS doesn’t in fact offer patients disposable bed-wear, although I really do wish it would. Instead, we get to wear a range of misshapen, one-size-fits-nobody reusable pyjamas. Luckily they’re brilliant, by which I mean awful and they come in a wide range of green; let’s be generous and call it spearmint. Thanks to washing temperatures greater than those at the center-of-the earth, the once uniformly bile-tinged bed-wear is now offered in a selection of varying fades, with some extra special pairs even exhibiting the tell-tale signs of the previous occupant’s ailments. Sometimes though, depending on whether or not a doctor, nurse or another patient wants to look at your genitals, you’ll be given a backless gown instead. These simple pieces of fraying patterned fabric are just dressing gowns that you put on backwards, with cords that are impossible to tie unless you have an assistant standing uncomfortably close to your naked bottom.  But simple as they seem, they still cause enormous confusion as to how to actually wear.

Around six weeks after the transplant, I had arrived at Day Case to have my Stent removed. The stent – basically a plastic tube – is placed in the ureter during the transplant, holding it open to maintain drainage of urine until the surgical connection between the transplanted ureter and the bladder heals. And there’s only one way for it to come out.

There were five of us waiting for the uncomfortable procedure, each getting undressed behind individual curtains before sitting on our beds. One of these patients had the sort of cough that wasn’t really a cough, just a sort of persistent throat cleaning, second only in annoyance to the persistent sniff, frequently heard in cinemas and usually from the person in the seat next to you.

Eventually, the coughing man appeared from behind his curtain, having dutifully undressed and put on the gown. Standing in the middle of the ward, with his hands on his hips, he looked around. His initial confidence turned to a look of confusion as he noticed the other patients on the ward, all similarly gowned but wearing their garments the right way around. Looking down at his gaping front, he nervously fiddled with the untied cords, hanging at the side and said ‘This can’t be right? Why does yours look like that?’

‘I don’t know, why does YOURS look like that?’ I replied, not specifically referring to his gown.

Looking at his very clearly visible genitals, the distressing thought of a Cadbury’s mini egg, nestled on an orange scourer came to mind. Lifting up the cords with a look of foolish realisation, he shook his head and tied the two loose ends together, which frankly did little to improve the view. I offered him the internationally recognisable ‘turn around’ symbol by rotating my index finger in the air. He looked at my gown, then the other patient’s gowns and then nodded, knowingly. As he turned around to go back into his cubicle, he said ‘you’d think they’d make them more obvious’.  And I wondered just how much more obvious they could be.

As he complained to the nurse at the desk, about the unnecessary complications of putting on a clearly one-way only garment, she picked up a pen and wrote ‘THIS IS NOT THE BACK’ in capital letters on the gown, although ‘Front’ may have also sufficed.

I look forward to some years down the line, putting on a gown and noticing those faded, boil-wash instructional words are still there.